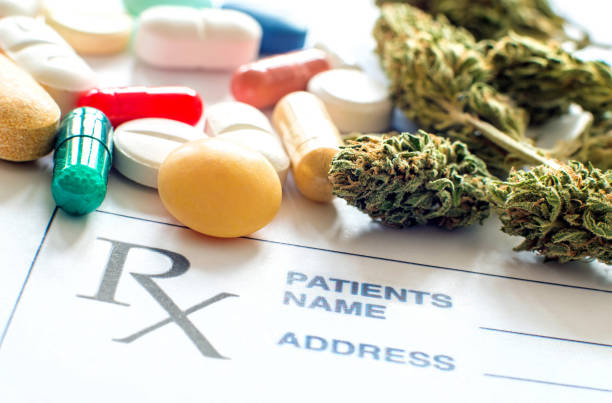 A Little Chemistry…Bare With Me

Why Medical Marijuana May Interfere with Your Medication

Is There Evidence of Marijuana Interfering with Medications?

Many patients suffering from a variety of medical conditions do not get adequate relief using traditional medications.  Medical marijuana is proven as a safe, natural, and effective alternative or adjunct to many medications.  But as patients begin to consider medical marijuana as an alternative, a common concern is whether marijuana will interfere with their prescription medications or herbal supplements.  Unfortunately, while the use of marijuana for medicinal purposes have skyrocketed, the research about marijuana is lagging far behind. This is because marijuana, despite its medicinal legality in many states, is federally illegal and considered a schedule I drug which places a nearly impenetrable barrier on research.  The tide is turning and currently many large university medical systems are studying marijuana.  Based on the research we have, we do know that there is definitely potential for marijuana to interact with certain medications.

A Little Chemistry…Bare With Me

Why Medical Marijuana May Interfere with Your Medication

Marijuana can, theoretically, either increase or decrease the concentration of certain medications.  As well, certain medications can increase or decrease concentrations of marijuana.  This is because THC and CBD are metabolized by CYP2C9 and CYP3A4.  Thus, if another medication inhibited this enzyme, it would, in theory, be expected to inhibit the elimination of THC and thereby increase the concentration of THC. One study did show that ketoconazole, an inhibitor of CYP3A4, increased concentrations of THC1.2-1.8 fold.  In general, the CYP3A4 inhibitors slightly increase THC levels while the drugs that are CYP3A4 inducers slightly decrease THC and CBD levels.

Because THC is a CYP1A2 inducer, theoretically, it can decrease the amount of certain drugs that are broken down by that enzyme by speeding up the breakdown.  This means they may be less effective.  Some drugs that are metabolized by CYP1A2, thus may be decreased by marijuana use, are:

CBD is a potent inhibitor of CYP3A4 and CYP2D6.  Because CYP3A4 metabolizes about a quarter of all drugs, CBD may increase serum concentrations medications such as:

The CYP2D6 enzyme metabolizes some pain medications and many antidepressants, so CBD may also increase serum concentrations of

Is There Evidence of Marijuana Interfering with Medications?

So yes, in theory, marijuana can decrease the efficacy of your medication by increasing its breakdown in the body or it can increase the concentration of your medication by slowing down the breakdown.  But is there evidence that it actually has a clinically significant effect?  There is a paucity of literature as stated before.   There are some case studies of patients taking the blood thinner warfarin having increased INR levels resulting in the need to reduce the amount of warfarin they were taking.  As well, one study in children using CBD for treatment of severe seizure disorder were noted to have elevated levels of clobazam.  For now, the existing data is insufficient to accurately characterize drug interactions of marijuana or its constituents with other medications.  I advise all medical marijuana patients to make sure that their prescribing physicians know that they are taking medical marijuana and aware of potential interactions.  I also warn all of my patients who are taking blood thinners to monitor their INR when applicable and to watch for increased bruising or bleeding.

The doctors at Cannabis Care Consultants will review your medication and discuss all risks and benefits.  They are there to answer your questions and guide you on your journey to health.  If you are looking to get a medical card or would like to renew your existing card, book an appointment today.